According to Holy Tradition, the Entry of the Most Holy Theotokos into the Temple took place in the following manner. The parents of the Virgin Mary, Saints Joachim and Anna, praying for an end to their childlessness, vowed that if a child were born to them, they would dedicate it to the service of God. When the Most Holy Virgin reached the age of three, the holy parents decided to fulfill their vow. They gathered together their relatives and acquaintances, and dressed the All-Pure Virgin in Her finest clothes. Singing sacred songs and with lighted candles in their hands, virgins escorted Her to the Temple (Ps. 44/45:14-15). There the High Priest and several priests met the handmaiden of God. In the Temple, fifteen high steps led to the sanctuary, which only the priests and High Priest could enter. (Because they recited a Psalm on each step, Psalms 119/120-133/134 are called “Psalms of Ascent.”) The child Mary, so it seemed, could not make it up this stairway. But just as they placed Her on the first step, strengthened by the power of God, She quickly went up the remaining steps and ascended to the highest one. Then the High Priest, through inspiration from above, led the Most Holy Virgin into the Holy of Holies, where only the High Priest entered once a year to offer a purifying sacrifice of blood. Therefore, all those present in the Temple were astonished at this most unusual occurrence. After entrusting their child to the Heavenly Father, Joachim and Anna returned home. The All-Holy Virgin remained in the quarters for virgins near the Temple. According to the testimony of Holy Scripture (Exodus 38; 1 Kings 1: 28; Luke 2: 37), and also the historian Josephus Flavius, there were many living quarters around the Temple, in which those who were dedicated to the service of God dwelt. The earthly life of the Most Holy Theotokos from Her infancy until She was taken up to Heaven is shrouded in deep mystery. Her life at the Jerusalem Temple was also a secret. “If anyone were to ask me,” said Saint Jerome, “how the Most Holy Virgin spent the time of Her youth, I would answer that that is known to God Himself and the Archangel Gabriel, Her constant guardian.” But there are accounts in Church Tradition, that during the All-Pure Virgin’s stay at the Temple, She grew up in a community of pious virgins, diligently read the Holy Scripture, occupied Herself with handicrafts, prayed constantly, and grew in love for God. From ancient times, the Church has celebrated the Feast of the Entry of the Most Holy Theotokos into the Temple. Indications that the Feast was observed in the first centuries of Christianity are found in the traditions of Palestinian Christians, which say that the holy Empress Helen (May 21) built a church in honor of the Entry of the Most Holy Theotokos into the Temple. Saint Gregory of Nyssa, in the fourth century, also mentions this Feast. In the eighth century Saints Germanus and Tarasius, Patriarchs of Constantinople, delivered sermons on the Feast of the Entry. The Feast of the Entry of the Most Holy Theotokos into the Temple foretells God’s blessing for the human race, the preaching of salvation, the promise of the coming of Christ.
https://www.oca.org/saints/lives/2019/11/21/103357-the-entry-of-the-most-holy-mother-of-god-into-the-temple

Regular services are now being held at Ss. Peter & Paul Orthodox Church.  All are welcome!  The monthly calendar gives the type and time of services. As present civil authority regulations permit only 30 persons at any given service. It  is necessary for you to register for Sunday Divine Liturgy and any Other service that is marked “registration.”  To  register go to signupgenuis or e-mail Maria Torrisi mdtorrisi@gmail.com or Father James frjames@ssppoc.org or leave message on the parish phone 908-685-1452.  Registration deadline is Fridays evenings at 9:00p.m.

Reminder that you are required to observe social distancing and wear a mask or face covering, except for children under age of 2. For further information or clarification about the schedule or health regulations, please contact Father James Parsells. 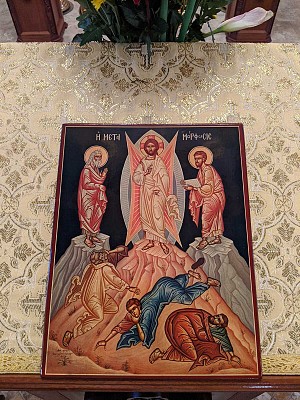