Ss. Peter and Paul Orthodox Church on Washington Avenue began celebrating its 99th anniversary of service on Sunday with a church service and international food festival.

The festival embraced not only the eastern European roots of the church, but Italian, Greek, Lebanese and Puerto Rican to represent the membership today.

Jill Peterson, chairperson of the anniversary, said, "Our parish is like a big family that’s always changing with new parishioners joining and bringing in their own cultures. We chose to make it an international event to represent the different cultures that are prevalent in our parish and to introduce their ethnic foods. It was a great day and we’re already planning our 100th anniversary."

The church has been in the community since 1915 when a small group of worshippers rented a building in a lumber yard on North Main Street.

With just the bare necessities, the parishioners, many of whom came to Manville to work at the Johns-Manville Corporation, built a strong bond. Their ethnic backgrounds were mostly from Russia, the Ukraine, and other Eastern bloc countries.

Ms. Peterson said young and old all were there to help begin this special celebration.

"One of the things that made this day so special was the involvement of the children in our parish in so many aspects of the day. From the altar servers that participated in the services earlier in the day to the children’s choir and Russian dancing to helping at the festival, this was as much their celebration as it was for the adults."

According to Ms. Peterson, if you step inside the small church and you’ll "feel like you’ve stepped into another world." The detailed iconography fills every space on the ceiling and walls. Stained glass windows filter the sunshine through the colorful images of saints and scripture. Beeswax candles burn, incense drifts on the air and the tones of prayers that are always sung or chanted greet the ears. It is an immersion of all senses into an ancient faith.

A 2 p.m. service began the celebration with Bishop Michael of the Diocese of New York and New Jersey of the Orthodox Church of America, and Fr. James Parsells of Ss. Peter and Paul Orthodox Church with serving at the Akathist and Anointing with Holy Oil Service. The congregation came up to be anointed by the bishop.

There was a brief performance of the children in the parish singing liturgical hymns, followed by walking across the street to the VFW to enjoy foods from the ethnicities represented in the parish, including Russian, Polish, Georgian, Romanian, Italian, Greek, Lebanese and Puerto Rican. Some of the foods included Russian dumplings, kale soup, stuffed cabbage, eggplant with walnuts, hummus, kibbee, stuffed grape leaves and goulash.

Bob Kita of Deja Vu provided the music and there was a short Russian dancing demonstration by the kids in the parish.

"In years past, the tight-knit community was composed of large extended families that would pray together and then return home on Sunday to enjoy large dinners and fellowship. Today, the families are smaller and more ethnically diverse, but the parish gathers after the Divine Liturgy to enjoy a hearty coffee hour together, serving for many as the new extended family.

The language of the services has changed over the years from Church Slavonic to English, following the prescription of St. Bishop Nikolai Velimirovich, who taught that services should be conducted in a country’s language.

"This change opened the door to people from all over the world to worship together," Ms. Peterson said. 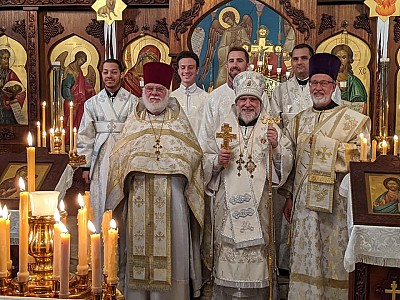