Pictures from Palm Sunday on Sunday April 13 at Saints Peter and Paul church in Manville, NJ.

Palm Sunday is the celebration of the triumphant entrance of Christ into the royal city of Jerusalem. He rode on a colt for which He Himself had sent, and He permitted the people to hail Him publicly as a king. A large crowd met Him in a manner befitting royalty, waving palm branches and placing their garments in His path. They greeted Him with these words: “Hosanna! Blessed is he who comes in the name of the Lord, even the King of Israel! (John 12:13).

This day together with the raising of Lazarus are signs pointing beyond themselves to the mighty deeds and events which consummate Christ’s earthly ministry. The time of fulfillment was at hand. Christ’s raising of Lazarus points to the destruction of death and the joy of resurrection which will be accessible to all through His own death and resurrection. His entrance into Jerusalem is a fulfillment of the messianic prophecies about the king who will enter his holy city to establish a final kingdom. “Behold, your king is coming to you, humble, and mounted on an ass, and on a colt, the foal of an ass” (Zech 9:9).

Finally, the events of these triumphant two days are but the passage to Holy Week: the “hour” of suffering and death for which Christ came. Thus the triumph in a earthly sense is extremely short-lived. Jesus enters openly into the midst of His enemies, publicly saying and doing those things which mostly enrage them. The people themselves will soon reject Him. They misread His brief earthly triumph as a sign of something else: His emergence as a political messiah who will lead them to the glories of an earthly kingdom. 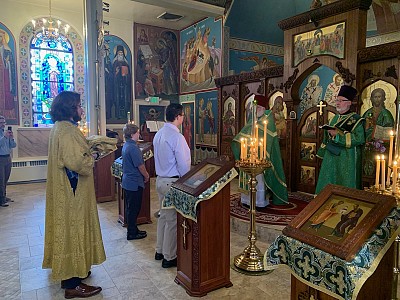