Pictures from the Laudation of the Most Holy Theotokos services held at Saints Peter and Paul church in Manville, NJ

On the Fifth Saturday of Great Lent, the Saturday of the Akathist, we commemorate the “Laudation of the Virgin” Icon of the Most Holy Theotokos.

In 625, when the emperor Heraclius was fighting the Persians, the Khan sent forces to attack Constantinople by land and by sea. Patriarch Sergius urged the people not to lose heart, but to trust in God.

A procession was made around the city with the Cross of the Lord, the robe of the Virgin, the Icon of the Savior not made by hands, and the Hodigitria Icon of the Mother of God. The Patriarch dipped the Virgin’s robe in the sea, and the city’s defenders beat back the Khan’s sea forces. The sea became very rough, and many boats sank. The invaders retreated, and the people of Constantinople gave thanks to God and to His Most Pure Mother.

On two other occasions, in 655 and 705, the Theotokos protected the city from Saracen invaders. A feastday dedicated to the Laudation of the Virgin was established to commemorate these victories. The Akathist to the Mother of God is believed to originate from this period, and its use has spread from Constantinople to other Orthodox lands. 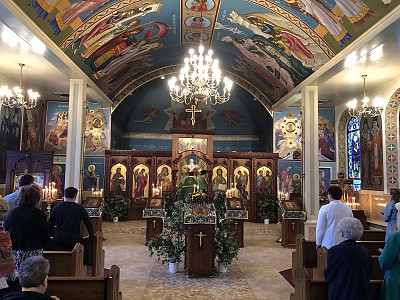